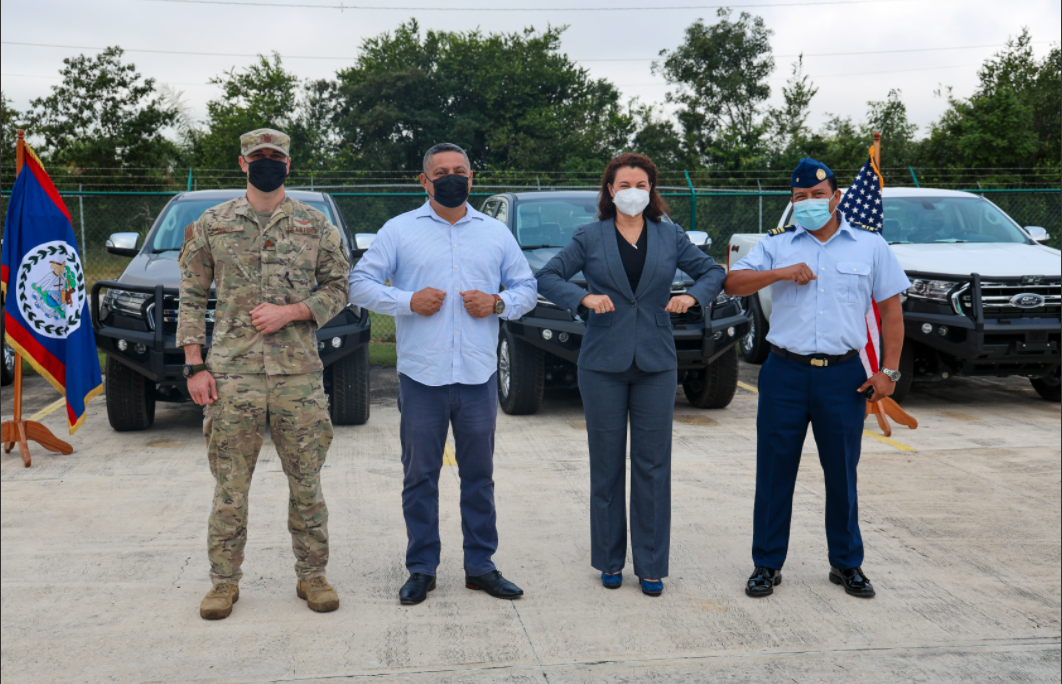 Belmopan – The U.S. Embassy today donated four Ford Ranger pickup trucks valued at over US $206,000 to the Belize Joint Intelligence Operations Centre (JIOC) for use in investigating and countering transnational organized crime in Belize. The donation was made through the U.S. government’s Foreign Military Financing grant program and coordinated through the U.S. Embassy’s Security Cooperation Office.

The brand-new vehicles will support the deployment of JIOC assets to remote areas in its ongoing efforts to disrupt and deter the illegal movement of drugs, people, weapons, and other contraband through Belize. The JIOC comprises members of the Belize Defence Force, Belize Coast Guard, Police Department, Customs and Excise Department, and the Immigration Department.

“The United States has pledged our continuing assistance to our partner, Belize, in the effort to protect its people and sovereignty from transnational criminal organizations. Today’s donation of high-performance vehicles to the JIOC will facilitate a quicker and more effective response to criminal activity that threatens citizen security. As Belize’s strongest ally, the United States will continue to stand with Belize,” noted U.S. Embassy Chargé d’Affaires, a.i. Leyla Moses-Ones.

Joint Intelligence and Operations Center Director Lieutenant Commander Freddie Ku emphasized, “The donation represents another step in the long and fruitful relations between Belize and United States of America. The Joint Intelligence Operations Center’s mandate requires us to be able to deploy across the country; therefore, mobility is a critical component that we cannot do without. The new fleet of vehicles will enhance our Joint Enforcement Team’s ability to combat transnational organized crime.”

In the past three years, the American people, through the U.S. Embassy’s Security Cooperation Office, have contributed over US $3.2 million in security assistance to Belize through equipment donations, training, and military education.