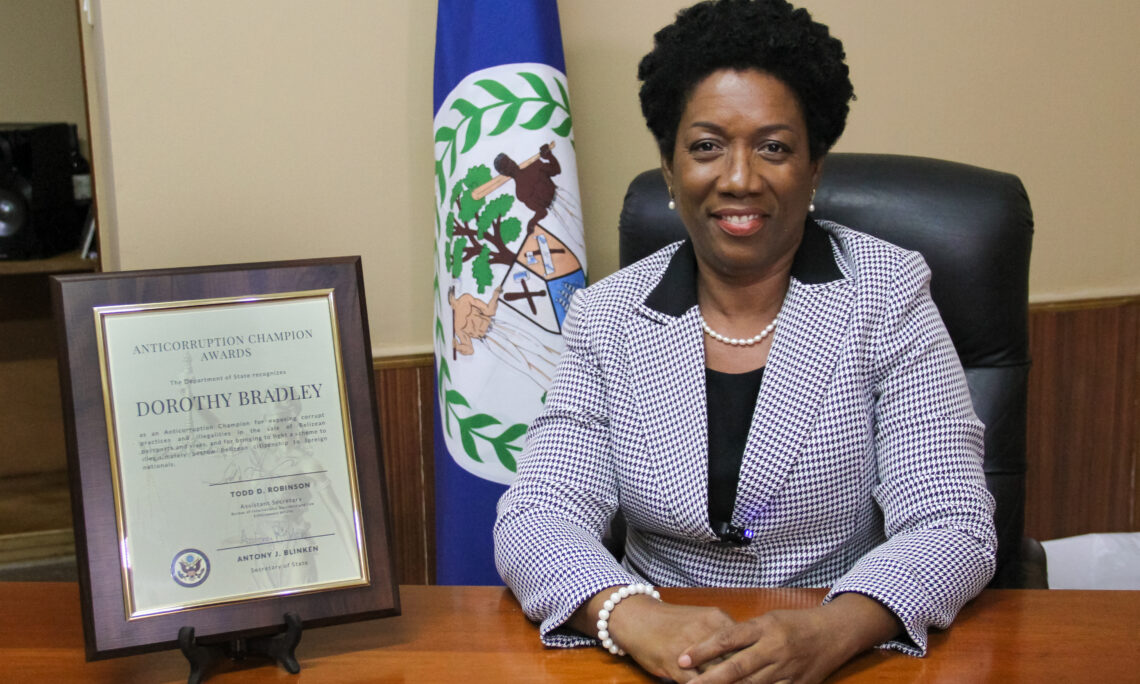 Belmopan – Belize’s former Auditor General Dorothy Bradley was among 12 individuals honored today with the U.S. Department of State’s Anticorruption Champions Award. In a virtual ceremony hosted by the U.S. Department of State’s Bureau of International Narcotics and Law Enforcement Affairs, Bradley delivered her acceptance speech for the award recognizing her impactful work in advocating for transparency and accountability in Belize’s public sector.

The U.S. Department of State launched the Anticorruption Champions Award to honor individuals who have demonstrated leadership, courage, and impact in preventing, exposing, and combating corruption. The award comes ahead of tomorrow’s International Anticorruption Day and recognizes global anticorruption champions in government, business, and civil society.

Secretary of State Blinken, in his remarks at today’s ceremony, underscored, “Often, when speaking of massive, complex challenges like corruption, we lose sight of the fact that our ability to make meaningful progress and change people’s lives for the better comes down to the work of individuals — people who, through sheer tenacity, creativity, and bravery, show us that even the most daunting problems are surmountable.”

Under her leadership as Auditor General, Bradley’s office exposed corrupt practices and illegalities in the sale of Belizean passports, visas, and granting of Belizean citizenship to foreign nationals. Her report on the findings of an audit conducted at the Ministry of Immigration provided evidence that resulted in the dismissal of a sitting Cabinet Minister and contributed to the Belizean government signing the United Nations Convention Against Corruption (UNCAC) in December 2016. Bradley retired from the public sector on December 7, 2021.

President Biden has designated the fight against corruption as a core U.S. national security interest. Combating corruption will be a central theme of the upcoming Summit for Democracy. The Summit, to which Belize is invited, is slated for December 9-10 and will bring together global leaders from government, civil society and the private sector to discuss challenges and opportunities for international collaboration to strengthen democratic systems.

On behalf of the Unites States, U.S. Embassy Belmopan congratulates Dorothy Bradley on her prestigious award and continues to stand proudly with all Belizean champions of transparency, accountability, and democracy.