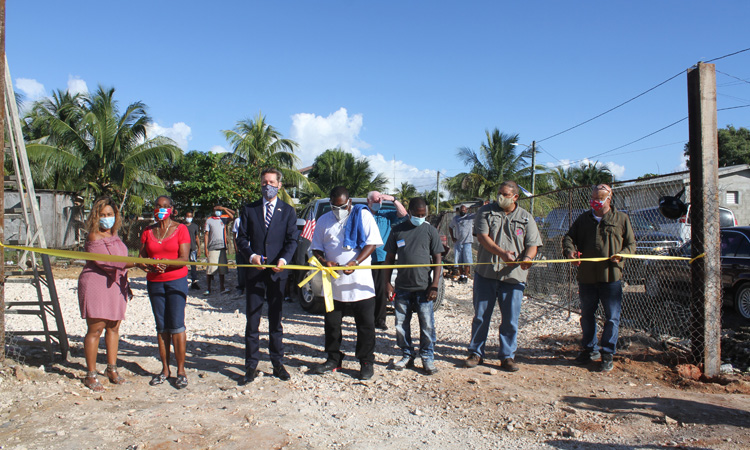 Belmopan – On December 15, U.S. Embassy Belmopan, alongside project partners the Love Foundation and the Kolbe Foundation, formally launched its second community resource hub in St. Martins under the “Empowering Communities to Empower Themselves” (ECTET) initiative. These community resource hubs will be the centers for entrepreneurial and vocational training to create alternatives to gang activity in underserved neighborhoods long associated with gang violence. The ECTET Initiative received funding from U.S. Embassy Public Affairs aimed at improving citizen security and increasing economic prosperity.

Highlighting the initiative’s potential to create meaningful social and economic impact in marginalized communities, Chargé d’Affaires, a.i. Keith Gilges noted, “This initiative also reminds us that sometimes the individuals capable of creating the greatest positive change in an underserved area are the very individuals who have already turned around their own lives. These people are often overlooked because of how society perceives them. We should all take a second look.”

Chargé Gilges further emphasized, “As the Yarborough ECTET graduates have shown, many of these formerly marginalized individuals are quickly becoming the ‘guardian angels’ of their communities, and are, in the process, appealing to the moral fiber of their friends, neighbors and loved ones to commit to improving their neighborhoods as well.”

Chargé Gilges delivered the keynote address at the ceremony inaugurating the St. Martin’s Area Community Resource Hub, while celebrating the successful ECTET program graduates from the Yarborough Community Resource Hub. He was accompanied by Dr. Rene Villanueva Sr., Love Foundation Chairman of the Board and Vice Chairman of Kolbe, as well as Deborah Sewell, Love Foundation Executive Director and Francis Woods of the Kolbe Foundation.

The new St. Martin’s Hub is the second of three resource hubs scheduled to open in Southside Belize City over the course of the project’s five-month implementation plan. The first community resource hub was launched in Yarborough in October 2020 and the final hub will be launched in George Street in January 2021.