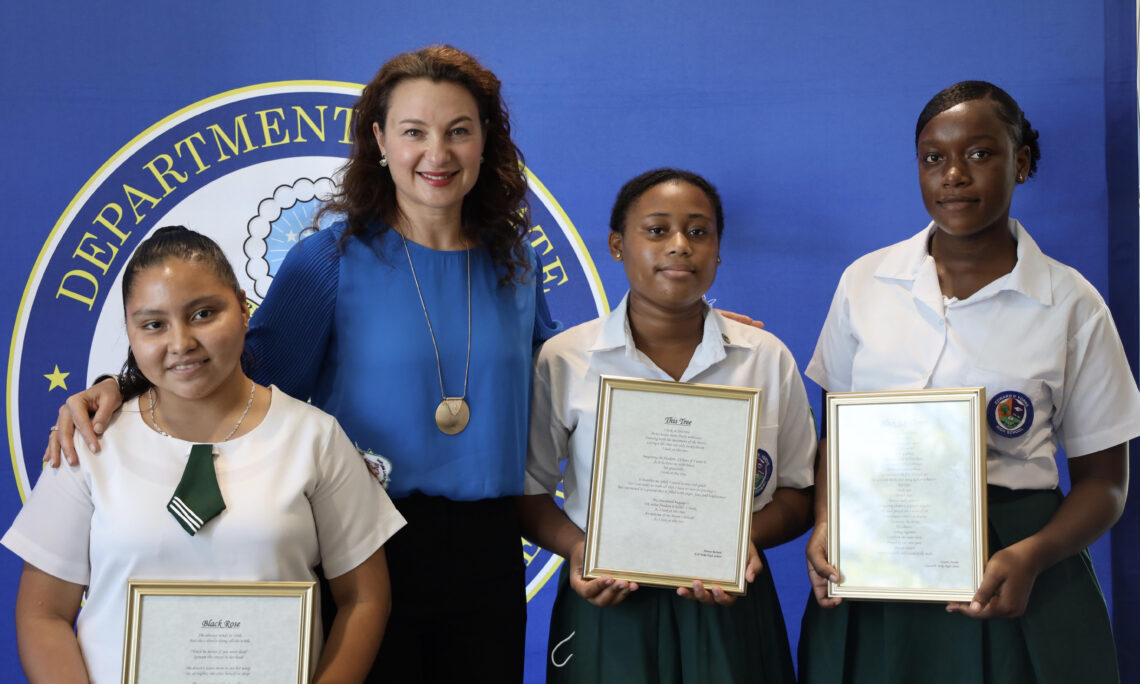 Belmopan – U.S. Embassy Belmopan hosted the winners of the Embassy’s first-ever Black History Month Poetry Contest.  Chargé d’Affaires, a.i. Leyla Moses-Ones recognized the three Belizean high school student winners during a special ceremony highlighting their inspiring works.  Their visit included a tour of the U.S. Embassy where their framed poems have been on prominent display over the past month.

For this February’s Black History Month, students from high schools across Belize were invited to submit an original poem related to this year’s theme “Black Health and Wellness.” Eleven students from seven schools in three separate districts made submissions. In addition to being displayed at the U.S. Embassy, the three winners were also invited to appear with U.S. Embassy Public Engagement Specialist Shadel Young on Channel 7’s “Sun Up On 7” morning show.  The Embassy’s social media accounts featured videos of the students reciting their original poems in their home communities.

U.S. Embassy Chargé d’Affaires Leyla Moses-Ones emphasized, “One of the most empowering opportunities we can offer young people is a platform where their voices can be heard. Meaningful engagements such as this year’s Black History Month poetry contest allow the talents of tomorrow’s leaders to be heard.  Poetry is an inspiring platform for youth to express their creativity and sense of self.”

The U.S. Embassy partnered with local organizations Peacework Belize and the Optimist Club of Belize on logistic support to make this year’s contest possible.