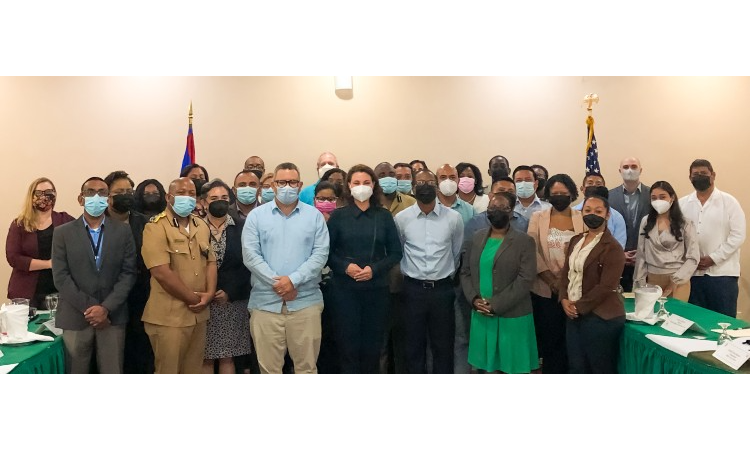 Belmopan – The U.S. Embassy and the Government of Belize hosted a bilateral meeting today to discuss the full range of U.S. – Belize security cooperation and shared democracy goals. The two sides reviewed security developments and reaffirmed the importance of enhanced coordination on counternarcotics efforts and strengthening citizen and border security in Belize.

Chargé d’Affaires Moses-Ones underscored, “Fostering citizen security and strengthening the rule of law is a key pillar of the partnership between the United States and Belize. From assistance on countering trafficking in persons and illicit narcotics, to professionalizing forensics labs, to equipping law enforcement and customs with vehicles, and much more, the United States is committed to standing together with our partner, Belize, to create safer streets and more resilient communities.”

In his remarks, Hon. Musa expressed, “It is no secret that the issue of transnational organized crimes is more complicated and multifaceted than ever, as it continues to increase and take advantage of the economic implications imposed by the COVID-19 pandemic. Therefore, it is reassuring that we are not in this fight alone, but instead with the continued strong relations between our countries we will fight the organized criminal elements while expanding on Belize’s vision for a safe and secure Belize with its sovereignty and territorial integrity intact.” Belize and the United States host bilateral meetings on a bi-annual basis to seek ways for increased cooperation on national and regional security issues. Since 2009, the United States has provided more than US $34.8 million to advance security in Belize.