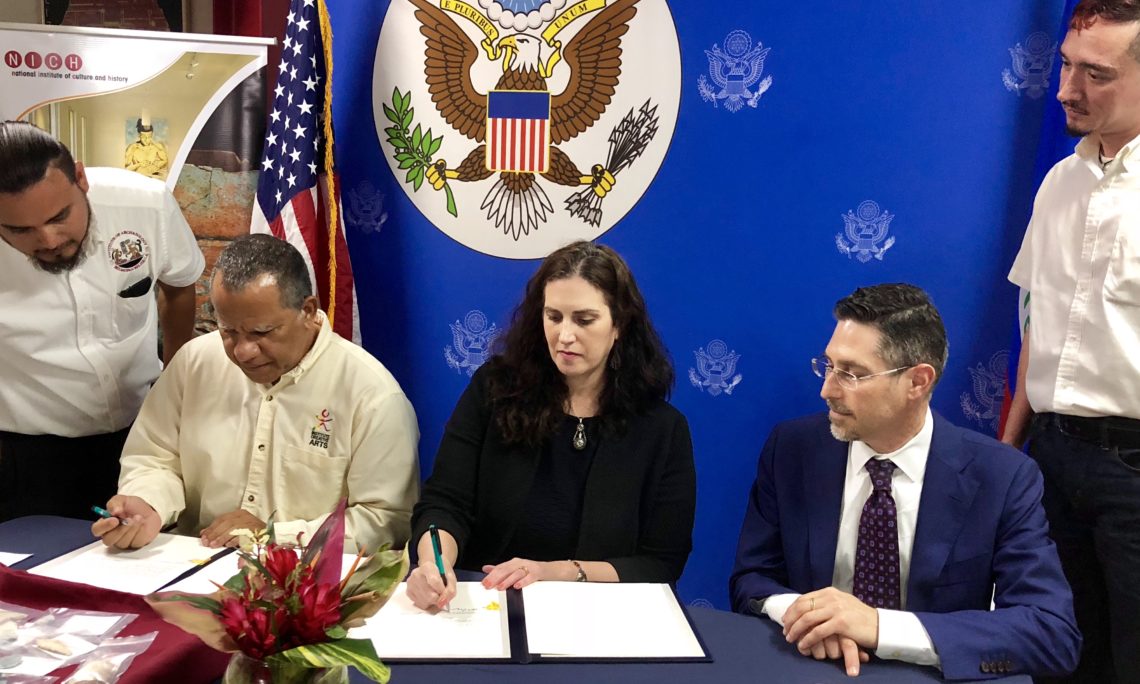 Acting Charg? d’Affaires Deborah Lingwood represented the Government of the United States and Acting President of NICH Greg Vernon-the Government of Belize. The goals of this cultural property Agreement are to: reduce the incentive to pillage; help Belize protect its cultural heritage; and increase lawful access to cultural objects and awareness of world heritage by encouraging interchange of materials for scientific, cultural and educational purposes. The United States has been unwavering in its commitment to protect and preserve cultural heritage in Belize and around the world. Our policy is clear: the unlawful destruction of cultural heritage and the trafficking of cultural property are unacceptable.

Cultural property trafficking is a problem throughout Central America. Pillaging of archaeological materials deprives nations of cultural heritage and identity. Heritage sites that are hundreds and thousands of years old, a record of civilization over time, are being destroyed for financial gain. This practice has another, even darker side. Transnational organized criminal groups and terrorist organizations traffic cultural property to finance their activities in the same way they traffic arms, drugs, natural resources, and people. The Agreement demonstrates the joint commitment of the two countries to ensure that Belize’s heritage will be protected and accessible for future generations to enjoy and appreciate.

We are honored to partner with the Institute of Archaeology and NICH in this important endeavor-to preserve Belize’s rich cultural heritage. Our strong partnership is ongoing. Jointly, through Archaeology in the Community program, we have trained students, law enforcement and customs personnel, and tour guides. Through Ambassadors Fund for Cultural Preservation program we have restored and preserved Santa Rita, Lamanai, and Benque Veijo del Carmen Reserve sites.