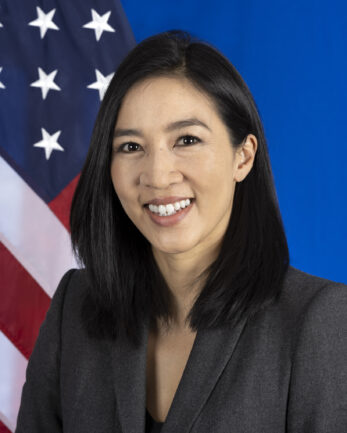 Michelle Kwan was appointed Ambassador Extraordinary and Plenipotentiary of the United States to Belize on October 7, 2022.  Ambassador Kwan has had a distinguished career in public service, diplomacy, and sports.  She represented the United States as the most decorated figure skater in U.S. history, having won 43 championships, including five world championships, nine national titles, and two Olympic medals.  She became the first Public Diplomacy Envoy in 2006 and for a decade traveled extensively on behalf of the U.S. Department of State to engage youth around the world on social and educational issues.  Ambassador Kwan also served as the Treasurer and Board Member of Special Olympics International.

After she earned a B.A. from the University of Denver with a focus on international relations and an M.A. from Tufts University’s Fletcher School of Law and Diplomacy, she became a Senior Advisor at the Bureau of Educational and Cultural Affairs at the U.S. Department of State.  In addition, she served as an Advisor to the Office of Global Women’s Issues at the U.S. Department of State where she assisted with the U.S.-China Women’s Leadership Exchange and Dialogue.  Kwan is fluent in Cantonese.