The Bureau of Diplomatic Security (DS), is the security and law enforcement arm of the U.S. Department of State. DS is a world leader in international investigations, threat analysis, cyber security, counterterrorism, security technology, and protection of people, property, and information. It is responsible for providing a safe and secure environment for the conduct of U.S. foreign policy. Every diplomatic mission in the world operates under a security program designed and maintained by DS.

Diplomatic Security Service special agents, assigned to U.S. diplomatic missions overseas are known as Regional Security Officers (RSOs). These special agents serve as the advisor to the Ambassador or Chief of Mission on law enforcement and security matters and coordinate all aspects of a mission’s security program. They develop and implement effective security programs to protect our employees from terrorist, criminal, and technical attacks both at work and at home. 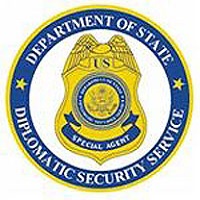 In addition, RSOs provide unclassified security briefings and other professional security advice to U.S. business executives overseas through the Overseas Security Advisory Council (OSAC). RSOs serve as the primary liaison with foreign police and security services overseas in an effort to obtain support for U.S. law enforcement initiatives and investigations including the capture and return of U.S. fugitives.