The building, originally erected in 1866 in New England,waslater dismantled and sent as ballast in freighters to Belize City whereit was reassembled as a private home. In the mid 1930s, the U.S. purchased the building from P.W. Shufeldt, the most prominent U.S. citizen in Belize City, to serve as a consulate in what was then British Honduras. The first vice consul to work on the ground floor, Culver Gidden, later married Shufeldt’s daughter,whose family was living upstairs. Six Gidden children were born in this building before the family’stransfer at the end of World War II. During those parsimonious times, it was P.W. Shufeldt who sponsored the annual 4th of July party on these grounds because the Vice Consul had no funds for such an event.

The original building had porches only on the back and front, and Hutson Street was a pathway from Gabourel Lane to the sea front. Termites andthe tropical elements have always been a problem andmuch of the building has had to be replaced, piecemeal, over the years. In the 1950s, the impressive Corinthian columns had to be replaced with plain flat wooden boards due to termite damageand because no cabinetmaker in Belize at that time could duplicate the decorative design. 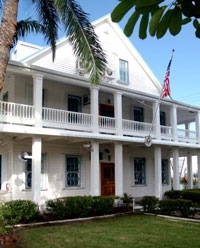 This handsome building has survived numerous hurricanes, fires and other vicissitudes of local life. In 1931, the building was badly damagedby a hurricane. As a result of tidal wave action the building was flooded up to the second story. In thesame hurricane then Consul G. Russell Taggart was injuredwhen the building collapsed and later died.Likewise, in 1961, Hurricane Hattie’s high water and winds caused extensive damage to the building.This old building has taken all in stride, including the foot of mud left behind by Hurricane Greta in 1978.

Since Belizean independence in 1981 until November 17, 2006, this building, with various additions, served as the U.S. Embassy and was the last such wooden U.S. embassy building in the world.

The building was eventually taken down in May 2011.