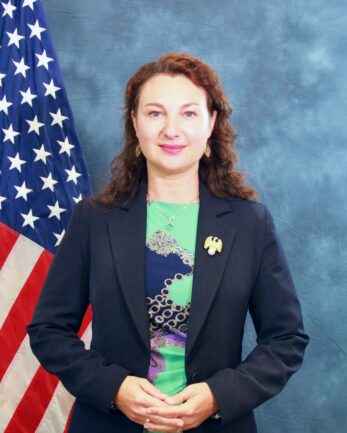 Ms. Moses-Ones has served in various positions in Washington, D.C., including as a Watch Officer at the State Department Operations Center and as Acting Director of the Office of Policy and Global Issues in the Bureau of European and Eurasian Affairs, which is responsible for some 20-cross-cutting issues including counterterrorism, transnational organized crime, counternarcotics, trafficking in persons, religious freedom, human rights, science and technology, and legislative affairs. Abroad, she has served in Costa Rica, Mozambique, Turkey, and Germany, with temporary duty assignments to Mexico and South Africa. She speaks
Turkish, Albanian, Spanish, Portuguese, and German.

Before joining the State Department as a Foreign Service Officer in 2001, she worked for legislative affairs and public relations firms in Washington, D.C. Ms. Moses-Ones has degrees from Georgetown University’s School of Foreign Service and the National Defense University, where she graduated with distinction with a master’s in national security and defense resource strategy. Her husband, Dr. Kyle Moses, is a retired Navy Captain and executive leadership coach. Together, they have four children and a very stubborn English Bulldog named Sir Winston