The Embassy of the United States of America serves as the focal point for the U.S. Mission and is the primary federal agency leading foreign relations in Belize on behalf of the U.S. Government. In addition to the various sections of the Embassy, there are also other U.S. Government agencies working in Belize.

On December 11, 2006, the Embassy of the United States of America moved from Belize City and officially opened in Belmopan. 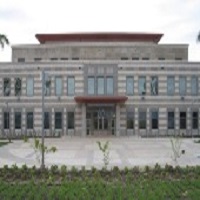 To mark the occasion, Director of Overseas Buildings Operations Charles E. Williams visited Belmopan to inaugurate the new facility. In addition, the 156th Army Band of the Louisiana National Guard deployed outside the United States for the first time to perform for this ceremony.

The new Embassy was designed and built as a state-of-the-art facility on a 10-acre site in the capital city of Belmopan. It was designed to fit with the natural setting and to complement the natural beauty of the area.

In addition, the art collection (PDF 7MB) in U.S. Embassy, courtesy of the Art in Embassies program,was selected to celebrate the diversity and beauty of nature – both of the United States of America and Belize.